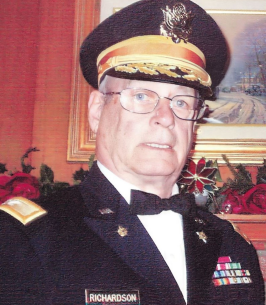 Alan D. Richardson, age 93, a longtime resident of Tyngsboro, passed away at Lowell General Hospital on Wednesday, October 5, 2022 surrounded by his loving family. He was the beloved husband of Marjorie (King) Richardson with whom he enjoyed 68 years of marriage.

He was born in Billerica on April 28, 1929 and was the son of the late John and Doris (Perry) Richardson.

Alan proudly served as a Colonel in the Massachusetts Army National Guard for 38 years. He was also the Regional Director and Chairman of the Merrimack Valley Chapter of the American Red Cross for many years. He was fascinated with history and was a military historian. Alan enjoyed traveling and spending time by the ocean. He especially loved driving up the coast of Maine and walking the Marginal Way in Ogunquit. Alan appreciated gourmet food and loved seafood. The highlight of his week was going out to dinner with his wife.

In addition to his loving wife, Alan is survived by his children Gail Richardson-Bassett of Garland, TX, Lynne Hall and her husband James of Nashua, NH, and Kyle Ann Maine of Denton, TX; his grandchildren, Ryan Hall, Rebecca Maine, and Russell Maine; his great-grandchildren, Sierra, Kaleb, and Jacob; and several nieces.

In addition to his parents, he is predeceased by his brother, John Perry Richardson.

A private burial was held at Fox Hill Cemetery in Billerica. In lieu of flowers, donations may be made in Alan’s memory to the American Red Cross at www.redcross.org.