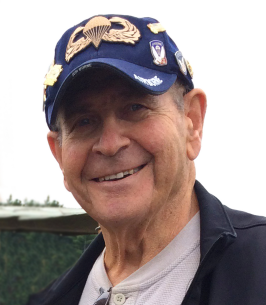 Anthony S. Kosowicz, age 84, a longtime resident of Dracut, passed away at his home on Friday, October 7, 2022, surrounded by his loving family. He was the beloved husband of Doris L. (Fauvel) Kosowicz with whom he enjoyed 52 years of marriage until her passing in 2012.

He was born in Lowell on April 23, 1938 and was the son of the late Anthony and Alice (Gendreau) Kosowicz.
Anthony grew up in the Centralville section of Lowell and worked most of his career as a driver for MacLellan Concrete Company. He lived his adult life in Dracut where he raised his family. Tony was very proud to have served in the Army's 503rd Airborne Infantry Regiment as a Paratrooper. His memory will live on in the hearts of his family forever.

Anthony is survived by his son, Anthony Kosowicz and his wife Sandra of Dracut; his daughters, Carol Barakos and her husband James of Dracut, Lynn Davis and her husband Scott of Westford, and Lisa Gatti and her husband Gus of Dracut; his grandchildren, Cameron and Spencer Barakos, Ashley, Charles, Corey and Cody Kosowicz, Lilliane Gatti, and Cash and Ruby Davis; his brother, Robert Kosowicz of NY; and his cousin, Theresa Gendreau. He will also be very missed by his extended family in NJ and NY, and step-grandchildren Christopher, Michael and Steven Gatti, and Jason Barakos.

In addition to his wife and parents, Anthony is predeceased by his siblings, Pauline Pannone, Arline Kosowicz, and Ray and Maurice Renaud.

Visiting hours will be held on Wednesday, October 12th from 4pm to 7pm at the Dracut Funeral Home, 2159 Lakeview Ave., Dracut. A Mass of Christian Burial will be celebrated on Thursday at 10am at St. Marguerite D’Youville, 1340 Lakeview Ave., Dracut. Committal Prayers will follow at St. Joseph Cemetery in Chelmsford.