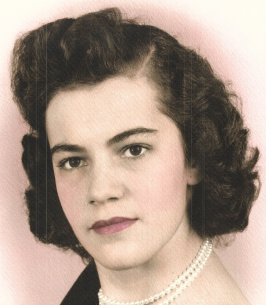 Claire F. (Proulx) Surprenant, 85, a longtime Dracut resident, passed away peacefully on Monday, June 6, 2022 at Tufts Medical Center, Boston, surrounded by her loving family. She was the beloved wife of the late Robert J. Surprenant with whom she shared almost 50 years of marriage until his passing in 2002.

She was born on August 18, 1936 in Woonsocket, RI, and was the daughter of the late Antoine and Yvonne (Richard) Proulx.

Claire worked as an Inspector for Lucent Technologies for many years until her retirement. In her spare time, she enjoyed crocheting hats and blankets that she gave away to family and friends. She was all American, having married the love of her life Robert, a Navy Sergeant, driving a Chevy, and shopping for her family. Most of all, Claire cherished the time she spent with her family, and was well known for being kind and generous with her love.

Claire leaves her children; Michael K. Surprenant and Robert A. Surprenant both of Dracut, her grandchildren; Kevin, Michelle, Jennifer, Samantha, Alexia and Nicolas Surprenant, her great-grandchildren; Emiley, Kyle, Olivia, Raymond, Christian, Dylan, Devante and Caleb, and her siblings; Raymond Proulx and his wife Brenda of Hudson, NH, Paul Proulx and his wife Marion of Nashua, and Paulette LeBlanc and her husband Paul of Nashua. She is also survived by her brother-in-law Richard Cloutier of Hudson and several nieces and nephews.

Sadly, she is predeceased by her son Daniel Surprenant who passed away in 2020 and her sister Jackie Cloutier.

Funeral services and interment will be held privately. Arrangements have been entrusted to the care of Dracut Funeral Home, 2159 Lakeview Ave., Dracut.