Obituary for Cynthia B. "Cindy" Bobola 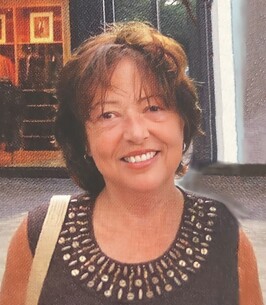 Cynthia B. “Cindy” Bobola, age 65, a resident of Uxbridge formerly of Dracut and Goffstown, NH, passed away at Beth Israel Deaconess Medical Center in Boston on Thursday, October 6, 2022, after a three-year battle with lung cancer.

She was born in Lowell on April 14, 1957 and was the daughter of the late Frederick and Barbara (Descheneau) Bobola.

Cindy lived most of her younger years in Dracut and was a 1975 graduate of Dracut High School. She lived her last year in Uxbridge and prior to that she lived in Goffstown, NH for twenty years where she operated her own printed circuit board business for over twenty years.

She loved taking walks in the woods with her German Shepherds and tending to her rose garden. Cindy enjoyed playing darts and cards at her parents’ beach house in Seabrook, NH. She could also cook a wicked diablo pasta among many of her dishes. She always watched the Food Network and liked to go antiquing.

She is survived by her partner of 20 years Peter Frabotta of Uxbridge; her sister, Suzanne Bobola of Dracut; her brother, Michael F. Bobola and his wife Suni of Lancaster, CA; her nephews, Michael C. Bobola, his wife Julie and their children, Mei, and Mirei of Redondo Beach, CA, Frederick L. Bobola and his fiancé Camila Ferrario of Woodland Hills, CA, and John M. Bobola of Lancaster, CA; her nieces, Nani Bobola and her husband Javier Rodriguez of Los Angeles, CA, Brandi Kirkendall, her husband Michael, and their children Michael and Arya of Oxnard, CA, and Justine Bobola of San Diego; her aunt Delores Clark of Gainesville, FL; and many cousins in the area.

Visiting hours will be held on Wednesday, November 2nd from 3pm to 6pm at the Dracut Funeral Home, 2159 Lakeview Ave., Dracut. Her funeral service will be held privately. In lieu of flowers, donations in Cindy’s memory can be made to the American Cancer Society at www.cancer.org.