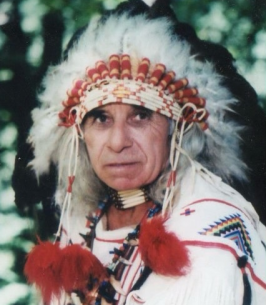 Edward J. Guillemette “Onkwe Tase”, age 97, a longtime resident of Dracut MA, passed away at Lowell General Hospital on Friday, September 2, 2022 surrounded by his loving family. He was the beloved husband of the late Jeannette (Masson) Guillemette until her passing in 1978.

He was born in Dracut on October 6, 1924 and was the son of the late Maxime Guillemette of Yamachiche, Quebec and Antoinette (Noel) Guillemette from the Three Rivers area of Quebec.

As a young man, he worked at the Richardson Farm in Dracut and as a shoemaker locally before proudly joining the United States Army. During World War II, he landed in Normandy and fought across Europe in the infantry. He was very proud of the time he spent in the service under General S. Patton and forever missed his war buddies that he spent so much time with. He always loved seeing the old tanks and reminiscing of those days, as hard and sad as they were for him.

After returning home from the war, he spent a lot of his life working two to three jobs while at the same time raising his family. He served as a volunteer fireman, dabbled in local archeology, and spent some time working as a detective for the Pinkerton Detective agency. He also worked security at the Bedford VA for over 30 years and then as an officer for the Dracut Police Department for an additional 20 years.

Edward was the original Commissioner of Indian Affairs in the state of Massachusetts sworn in by Governor Sergeant on October 13, 1974, helping to protect the rights of indigenous people and was a proud Native activist throughout his lifetime. He was involved in the American Indian Movement (AIM) and spent time traveling to Ganienkeh Mohawk territory in the early years helping community members. In the early 1970s, he founded a group he named GLICA (Greater Lowell Indian Cultural Association) and acquired land in the Dracut Tyngsboro State Forest where he fulfilled his dream of having a place where all could come and enjoy spending time learning about Native culture. In time, he separated from GLICA and co-founded UNACC (United Native American Cultural Center) where they obtained a building on a plot of land in Devens, MA. They currently use that location as a safe space for people of all cultures to gather, share, and educate one another.

In his lifetime, Edward enjoyed his goodies, attending pow-wows, singing and dancing, music and culture, arts and crafts, fishing and boating, nature and wildlife, flea-marketing and thrifting, and traveling in his camper. He mostly enjoyed doing these with family and friends. On his own, he enjoyed reading, writing poems, watching war movies, and more goodies.

Many people in the Greater Lowell area fondly remember him speaking, singing, dancing, and demonstrating his Native culture to the local schools, scouts, churches, etc. His family will always remember him as the best Dad, Pépère, and Uncle (fondly known as Uncle Tootsie). He was a man that led a good, honest life and was loved and respected by all who had the honor of knowing him.

In addition to his wife and parents, Edward is predeceased by all of his siblings along with his son, Edward A. Guillemette.

Visiting hours will be held on Thursday, September 8, 2022 from 4pm to 7pm, with a drumming ceremony beginning at 6:30pm at the Dracut Funeral Home, 2159 Lakeview Ave., Dracut. A graveside service will be held on Friday at 11am at St. Joseph Cemetery, 97 Riverneck Rd., Chelmsford. Kindly meet at the cemetery.

In lieu of flowers memorial donations can be made to United Native American Cultural Center (UNACC), PO Box 711, Ayer, MA 01432.