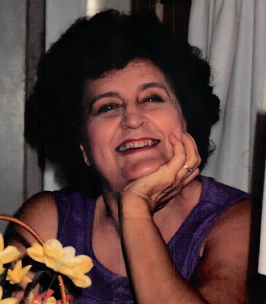 Estelle M. (LeClerc) Denver, age 95, passed away at her home on Saturday, October 29, 2022. She was the beloved wife of the late Frank A. Denver, a loving mother, grandmother, great grandmother, and sister.

She was born in Lowell on March 23, 1927, a daughter of the late Joseph G. and Mary B. (Boucher) LeClerc. She received her early education at St. Louis Academy in Lowell.

Estelle met the love of her life, Frank and they married on September 30, 1950. She was a homemaker when their children were young. Later in life she thoroughly enjoyed working at her brother Paul’s business – Royal Feast Potato Chip Co. until her retirement. She was a wonderful grandmother, and her grandchildren have many fond memories of the time spent with her.

She is survived by her daughter, Nancy McAvoy and her husband Wayne of Dracut; her three sons, Thomas Denver of Lowell, James Denver and his wife Denise of Tyngsboro, and Daniel Denver and his life partner Debbie Howard of Dracut; her grandchildren Leah Boisvert, Stefanie Boisvert, Danielle Dos Santos; her great grandchildren, Summer and Clover Fields and Alyssa Dos Santos. She is also survived by her sister Pauline Brousseau of CA; her sister in-law Lorretta LeClerc of Methuen, and Connie LeClerc of Methuen.

In addition to her husband, Estelle is predeceased by her brothers, Norman, John, Paul, and Leo LeClerc, brother in-law Pete Brousseau; sisters in-law, Kay Montmarquet, and Mary Gennell. She is also predeceased by her cherished grandson Christian Boisvert.

Services will be held privately. Interment will be at Oakland Cemetery, Dracut at a later date.