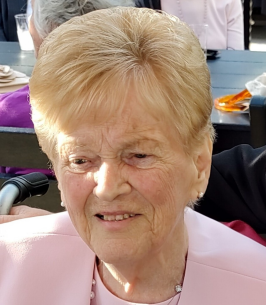 Jacqueline M. (Dumais) Brouillette, age 91, a resident of Tyngsboro, formerly of Lowell, passed away at her home on Thursday, September 15, 2022 surrounded by her loving family. She was the beloved wife of the late Edward O. Brouillette with whom she enjoyed nearly 60 years of marriage until his passing in 2014.

She was born in Lowell on April 25, 1931 and was the daughter of the late Arthur and Josephine (Matte) Dumais.

Jacqueline was a graduate of St. Joseph's High School and then attended the Nursing Program at St. Joseph's Hospital where she became a Registered Nurse. She continued to work at St. Joseph’s for many years and later worked for over 20 years for Lowell Visiting Nurses. Jacqueline was dedicated to the care of others and maintained her nursing credentials until the age of 84. She was a hard worker and forever devoted to her family, her children, and her friends. Jacqueline and Edward would often host family gatherings at their home, where their door was always open. She enjoyed spending time at Old Orchard Beach with her family. Jacqueline was an avid reader, seamstress, and baker, making delicious desserts from scratch. She was a longtime member of the Jean-Meuse Women's French Club in Lowell.

In addition to her husband, she is predeceased by her brother, Gerald Dumais, and several brothers-in-law and sisters-in-law.

Visiting hours will be held on Tuesday, September 20th from 4pm to 7pm at the Dracut Funeral Home, 2159 Lakeview Ave., Dracut. A Mass of Christian Burial will be celebrated on Wednesday at 11:30am at St. Mary Magdalen Parish, 95 Lakeview Ave., Tyngsboro. Interment will follow in St. Joseph Cemetery, Chelmsford. In lieu of flowers, donations may be made in Jacqueline’s name to the Alzheimer’s Association at www.alz.org.