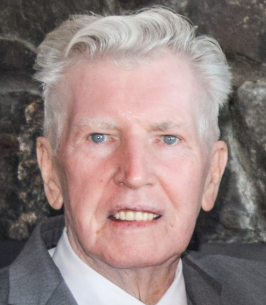 James (Jim) Carragher, age 86, passed away on May 19, 2022, after a short illness surrounded by his loving family. He was the beloved husband of Maureen (Shore) Carragher with whom he just celebrated 65 years of marriage to the love of his life.

Born in Lowell, MA on January 27, 1936, he was the son of the late James and Catherine (Rogerson) Carragher. James was a graduate of Lowell High School. James worked as the general manager of Towers Motor Parts for over 50 years before his retirement in 2001. He also owned and operated 7C’s Ceramics with his wife for 27 years. After his retirement, he turned his passion for wine into a hobby. He was often found creating barrels of wine by the dozen and was appropriately named JC’s Winery. Family and friends spent many years celebrating his craft at the annual “Wine Party”. His strawberry wine was most loved and will continue to be loved for years to come.

The family would like to extend a special thank you to the Pelham Police, Fire and EMS for all of their care and compassion the many times they cared for James. As an expression of sympathy, in lieu of flowers, donations may be made in James’s honor to White Mountain Winery, 2724 White Mountain Hwy, North Conway, NH 03860. All donations will be distributed to local dog rescues in Jim’s memory.

Visiting hours will be held on Monday, May 23rd from 10am to 12pm at the Dracut Funeral Home, 2159 Lakeview Avenue, Dracut. Followed by a funeral home service at 12pm. Interment St. Joseph Cemetery, Chelmsford.