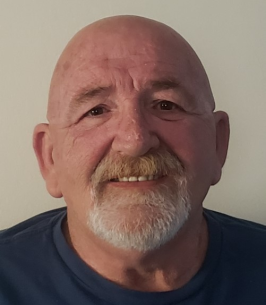 John J. Patronick, age 63, a longtime resident of Pepperell, passed away at his home on Tuesday, July 26, 2022 surrounded by his loving family. He was the beloved husband of Kimberly (Donovan) Patronick with whom he enjoyed 40 years of marriage.

He was born in Lowell on September 21, 1958 and was the son of the late Claire (Zipps) Patronick.

John was an avid sports fan. He loved the Patriots, Red Sox, Celtics, and Bruins. He enjoyed watching golf and playing cribbage with Manny and MJ. He had wonderful memories of going on beach vacations and traveling to more than a dozen ML ballparks, but he enjoyed nothing more than the time he spent with his family.

John was known for his work ethic, positive attitude, and ability to make friends with anyone. He retired after 20 years as a Sergeant at the Massachusetts Department of Corrections. He was also a master barber and worked for 15 years at Patriot Barber Shop in the town he loved. Next, he moved on to Stateline Irrigation in Tyngsboro where he spent 8 years and made lifelong friendships. John most recently had a job he loved at Treehouse Cannabis in Dracut.

In addition to his loving wife, John is survived by his children, his one and only Erin Patronick, and his best friend Adam Patronick, both of Pepperell; his grandchildren, Manny and MJ Monteiro of Pepperell; his sisters, Joanna LeRiche and her husband Gary of Dracut, and Maura Linscott and her best friend Mark Linscott of Lowell; his mother-in-law, Mary Donnelly of Lowell; his brothers-in-law, Warren Donovan and his wife Laurie, and David Donovan; his sister-in law Heather Donnelly-Berthold; his aunt, M. Lauris Donovan; and his many, many nieces and nephews, including his godchildren, Matthew Patronick, Mark F. Linscott II, and Lauren Donovan.

John is predeceased by his son, John H. Patronick; his brother, Stephen Patronick; his nephew, David Donovan; and his best friends, John Simard, and Gary Clarke.

Visiting hours will be held on Tuesday, August 2nd from 4pm to 7pm at the Dracut Funeral Home, 2159 Lakeview Avenue, Dracut. A Funeral Service will be held on Wednesday at 11am at the Funeral Home. Interment will follow in St. Joseph Cemetery, Chelmsford.