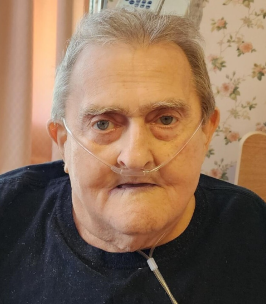 Joseph Robert "Joe" Demmons, Sr., age 79, a longtime resident of Dracut, passed away at Lowell General Hospital on Thursday, October 13, 2022 surrounded by his loving family. He was the beloved husband of Paula Ann (Lekites) Demmons with whom he enjoyed 55 years of marriage until her passing in 2018.

He was born in Lowell on October 31, 1942 and was the son of the Robert and Dorothy (Newcomb) Demmons.

Joe was a former employee of Richardson Construction as a site supervisor and later owned a successful construction company until his retirement. He was an active member of the Dracut Senior Center and enjoyed playing cribbage, taking trips to the casino and cooking for the other members.

He enjoyed taking long drives with his wife, restaurants, annual camping trips to Sebago Lake with family and friends, playing horseshoes, woodworking and making puzzles. He was an avid fan of Boston sports and would watch games with his family as often as he could.

He had a passion for cooking and baking and will always be remembered for his fudge, potato salad, chicken salad sandwiches and most of all his black moons.

Joe is survived by his children, Beth A. Overka and her husband David, Joseph R. Demmons, Jr. and his wife Charlotte; His four grandchildren, Ryan and Shelby Demmons and her fiancé Benjamin Auger, Megan Vadnais and her husband Kyle and Nicholas Overka; his two great grandchildren, Landon and Bentley Auger; his sister, Vivian Cregg; and his dear friend and caregiver Eileen Nutter.

In addition to his wife and parents, Joe is predeceased by his daughter Lisa F. Demmons who passed away in 1983 and brothers Jerry, Robert, Richard, Grant and Mark Demmons.

All services were held privately. In lieu of flowers donations may be made in Joe’s memory to the Alzheimer’s Association 225 N. Michigan Ave., Fl. 17, Chicago, IL 60601 or by visiting www.alz.org