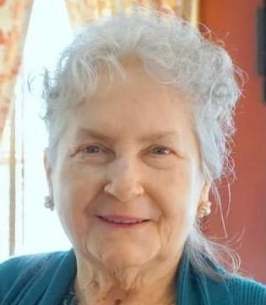 Laura V. (Dirsa) Manning, 82, of Dracut, died on September 7, 2022, at High Pointe Hospice House in Haverhill, MA. She was the wife of the late Joseph T. Manning, who she was happily married to for 55 years before his passing in 2015. Born in Lowell, on Good Friday, March 22, 1940, the daughter of the late John Dirsa and Louise (Cayer)(Dirsa) Harvey. She attended Lowell schools and was a 1958 graduate of Lowell High School. She was employed for a brief time at Raytheon before choosing to stay home to raise her children.

Laura was a communicant of St. Peter's Church, St. Joseph's Lithuanian Church, St. Michael’s Church and St. Rita’s Church in Lowell, St. Mary of the Assumption Church in Dracut, and Ste. Marie’s in Manchester, NH. She also had cherished memories with her daughter, Julie, of going to Confession, Mass and Adoration at St. Joseph the Worker Shrine.

In her free time, she loved to paint portraits. Her family especially treasures the paintings she did of each of her eleven grandchildren. Laura had her artwork displayed twice at the Chelmsford Art Society's Fourth of July Show.

She enjoyed traveling with her husband, Joe, on Catholic pilgrimages throughout Europe, the highlight being when they met St. Pope John Paul II in May of 2000. They also enjoyed relaxing trips to Bermuda, Ireland, Austria, France, Poland and Hawaii over the years. Laura and Joe were esteemed for their amazing dancing and would always garner applause and smiles everywhere they went.

Laura’s greatest treasure was her family. We will especially remember our Grammy and Grampy Christmas celebrations which brought all of us so much joy.

Relatives and friends are invited to pay their respects at the DRACUT FUNERAL HOME, 2159 Lakeview Avenue, DRACUT, on Saturday, Sept 10th from 3 until 5 PM and Sunday, Sept. 11th from 2 until 6 PM. Her Funeral will take place from the Funeral Home on Monday, Sept. 12th at 9 AM followed by her Funeral Mass at 10 AM in St. Rita Church, Lowell. Interment to follow in St. Mary Cemetery, Tewksbury. Those wishing may make contributions to EWTN Global Catholic Network, 5817 Old Leeds Road, Irondale, AL 35210.