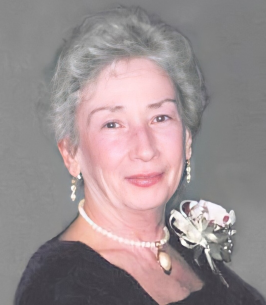 Lorraine (Riendeau) Desrochers, 89, of Dracut, passed away peacefully on Thursday, September 8, after a brief illness. She was the wife of the late Emile L. Desrochers, with whom she shared nearly 60 years of marriage. She and Emile spent much time on Cape Cod as their special time alone. In their later years, they wintered in Florida.

Lorraine was a congregant of Amoskeag Presbyterian Church in Manchester, NH.

Daughter of the late Rosario and Laura (Frechette) Riendeau, Lorraine was raised in Lowell and educated at St. Joseph’s School. She married in 1952 and raised her family together with her loving husband. In 1974, Lorraine graduated from Tewksbury State Hospital nursing school and continued to work for St. Joseph’s hospital until her retirement.

Lorraine was the mother of seven children, for whom she made holidays, and vacations a tradition. She spent annual vacations with her family at Hampton Beach. She loved celebrations which brought family together. Lorraine enjoyed spending time at the beach with her grown children, grandchildren and great grandchildren.

She always loved traveling with family and friends. Lorraine especially enjoyed her Alaskan adventure which included riding in a helicopter, flying in a prop plane, and dog sledding. Her personal entertainment included gardening, dining out, reading, sitting on her deck and special visits with grandchildren and great-grandchildren.

Visiting hours will be held on Tuesday, September 13th from 4pm to 8pm at the DRACUT FUNERAL HOME, 2159 Lakeview Ave., DRACUT. Her funeral service will be held at the Funeral Home on Wednesday at 10am. Interment will follow in St. Joseph Cemetery, Chelmsford.

Flower arrangements received in Lorraine’s memory will be repurposed at her request by the Power of Flowers Project, Tewksbury, MA