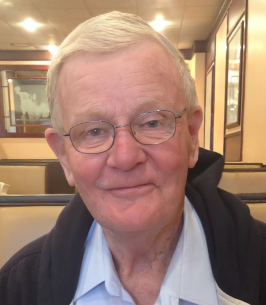 Roger Farby, age 87, a resident of Pelham, NH, passed away at Lahey Clinic in Burlington, on Saturday, August 13, 2022 surrounded by his loving family. He was the beloved husband of Mary-Jane (Czerapowicz) Farby with whom he enjoyed 55 years of marriage.

He was born in the town of Slough, England on June 30, 1935 and was the son of the late Thomas and Elizabeth (McKercher) Farby.

Roger grew up and was educated in England before immigrating to the United States in the 1960’s. He later met Mary-Jane and married her in August of 1967. Roger worked for the airlines for many years before retiring from American Airlines at the age of 82. In his spare time, he enjoyed traveling, photography, tending to the garden, beekeeping and ending his day with a good movie. Roger was extremely interested in history and world events. His favorite readings were found in National Geographic. He will be remembered for his clever sense of humor, thoughtfulness, and for his love of family.

In addition to his loving wife, Roger is survived by his daughter, Amanda Farby; his sisters, Meg Kershaw of Canada and Coral Kitchen of England; and many nieces and nephews.

He is predeceased by his siblings, Jean Haddon, Elizabeth Kemp, Colin Farby, and Tom Farby.

Visiting hours will be held on Saturday, August 27th from 1:00 pm to 4:00 pm at the Dracut Funeral Home, 2159 Lakeview Ave., Dracut. Funeral services and interment will be held privately. In lieu of flowers, memorial donations in Roger’s name may be made to the Pelham Fire Department, 36 Village Green, Pelham, NH 03076.