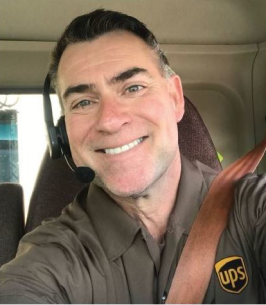 Those who knew him, loved him deeply and unconditionally. Sean was known to have a smile and a personality that would light up every room that he entered. Sean was very proud of all he was able to accomplish in his lifetime. He loved to work hard in all that he did, including his career as a CDL truck driver. He was a proud member of Local 25 Teamsters for over twenty-five years. Every morning his colleagues would be welcomed by a “good morning” and the brightest smile on his face or an invitation to join him in his jump roping daily routine. Sean committed himself to his career with pride, passion and enthusiasm. He was well known for his daily videos that he would share with his followers sending inspirational messages and experiences and message to everyone of his wishes for them to “have a good day” and encouragement to “keep smiling.” That was Sean’s motto. Sean had a unique talent to make a friend no matter where he went, from east to west, in between and beyond the borders he touched so many hearts of others.

Sean’s large family are genuine and loving people who beam with pride speaking of Sean. Sean attributes who he was as a man to where he came from and the people with whom he was surrounded. He was well known for always being that guy who had a hand to lend whenever he would receive a call. Whether it was to help someone move something or just an ear to lend, he would share his most heartfelt feelings and experiences with whomever he thought he could help brighten their way.

Sean’s two sons, Jonathan and Bryan, were his buds, his boys, and he loved them with all of his heart. Sean’s “beautiful wife” Cheryl, as he always referred and introduced her as, was his strength, his guide, his angel, caretaker, best friend and soul mate. Sean and Cheryl together were two halves of a whole for almost thirty blessed years, sharing a magical bond that many never have the blessing of experiencing.

Sean P. Sullivan, a beautiful, strong and genuine soul that leaves this world far too soon. But in a world that seems to be focused on so much despair, Sean’s hope is that we all focus on the good that we see over the bad. Love everyone. Be kind. Lend a hand. And most importantly, “keep smiling and have a good day!”

His Funeral Mass will be celebrated on Wednesday, August 10, 2022 at 2:00pm at the IMMACULATE CONCEPTION CHURCH, 144 East Merrimack St., LOWELL. KINDLY MEET AT CHURCH. All are welcome to attend a Celebration of Sean’s Life immediately following his Funeral Mass. In lieu of flowers, donations can be made in Sean’s memory to the National Brain Tumor Society, 55 Chapel Street, Ste. 200, Newton, MA 02458.