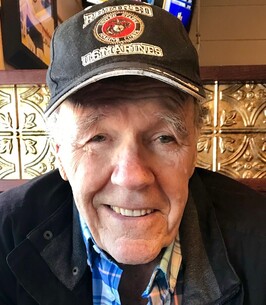 Walter “Wally” Richard Campbell, of Londonderry, NH and a former longtime resident of Dracut passed away on Friday, November 11, 2022 at the age of 86, with his beloved family at his side. He was the loving husband of Eleanor (Lovett) Campbell with whom he enjoyed 63 years of marriage.

He was born in Lowell on March 16, 1936 and was the son of the late Dominic and Margaret (Masse) Campbell.

In his early years, Wally joined the United States Marine Corp and proudly believed “once a Marine, always a Marine”. He was a member of Londonderry Post 27 VFW.

Wally was a devoted employee at Western Electric (AT&T) for 33 years, where he was known only as “Gator”. He retired at age 55 with a “Golden Handshake” and enjoyed many years afterwards traveling and working on cars. He was an avid lover of fast cars and antique trucks. He spent many weekends at the racetrack and was known to compete in amateur racing events where he enjoyed the exhilaration as if he were competing in the Indy 500!

Most of all, his greatest enjoyment in life came from his family. He adored his wife, Eleanor, and together, they raised their two daughters, Kathy and Debra. The four of them enjoyed spending time together, taking Sunday drives and having cookouts with family and neighborhood friends. They enjoyed their summer camping trips at Eastern Slopes, North Conway, visiting the White Mountains, and Newfound Lake.

Wally was also known to his favorite people as “Papa”. He was a fun grandfather to Jenna, Brittany, Matthew, and Heather. His heart grew with the addition of his bonus grandchildren, James, Daniel, Meghan and Thomas. Wally loved getting on the floor and playing with cars and trucks or giving wheelbarrow rides to his great-grandchildren, Peyton, Brayden, Jackson, Coleton, and Everly. We know in his heart that he would have enjoyed playing with his two-month old great-granddaughter, Kimberly.

Wally led a very productive, content life. It was very unfortunate and most difficult for his family to realize that Alzheimer’s Disease would slowly take the past few years away from him. Even in the hardest of days, his fun-loving, even-keeled personality shined through. We hope, however, that these last few, struggling years is not how we remember the life of Wally. Although these are the most recent memories of him, we need to value the decades of the man he truly was. Please continue to relive those happy times.

In addition to his loving wife, Wally is survived by his daughters, Kathy Medford and her husband Lee of Rebecca, GA, and Debra Caveney and her husband Robert of Windham, NH; his twin brother Donald Campbell and his wife Maureen; his sisters, Carol Brinson and Gloria Kidwiler and her husband Charles; and his cherished grandchildren and great-grandchildren.

Along with his parents, Wally is sadly predeceased by his sister, Barbara Norrod and her husband Harold; his brother-in-law, Carroll “Cal” Brinson.

Visiting hours will be held on Friday, November 18th from 9am to 11am at the Dracut Funeral Home, 2159 Lakeview Ave., Dracut. A funeral home service honoring Wally’s life will be held at 11am. Interment in Richardson Cemetery, DRACUT. In lieu of flowers, the family finds it appropriate for donations be made to Dracut Food Pantry 1934 Lakeview Ave, Suite 11, Dracut, MA 01826.